Michael Sheridan is a filmmaker and educator who has produced documentary and experimental films for local, national, and international social-issue and cultural organizations.

PBS, ABC, National Geographic, TLC, and Discovery have aired Michael’s work as a producer, cameraman and editor. The Isabella Stewart Gardner Museum, Boston Cyberarts Festival and many other galleries have exhibited his experimental work. The National Education Media Network, the Columbia International Film and Video Festival, the United Nations Association Film Festival, and EarthVision have screened and awarded his films.

For 25 years Michael has taught filmmaking and has been on the faculty at Northeastern University, MassArt and the former Boston Film and Video Foundation. From 2007-08 he served as a Senior Fulbright Scholar in Indonesia.

In 2010 Michael founded Community Supported Film (CSFilm). CSFilm amplifies local voices by mentoring and training storytellers and change-makers in under- and mis-represented communities. The documentary films produced during these collaborative projects are used in Screen & Discuss campaigns that bring local perspectives to the public and policymakers.

You can see Michael’s documentary and experimental films at SheridanWorks. 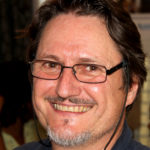